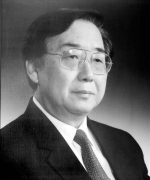 Guoguang Mu began teaching at Nankai University after receiving a Ph.D. from the Department of Physics in 1952. He founded and directed the university's Institute of Modern Optics, the first higher education institution in China to confer Ph.D. degrees in both optics and optical engineering. He served in other leadership roles at the university, including dean of the Department of Physics and the Graduate School, and as university president from 1985 to 1995.

Along with Yuan Lin Zhan, Mu wrote "the first classical fundamental book for optical physics and one of the most widely used optics textbooks in China," Optics (1964). He also wrote and published over 100 scientific research papers, held two patents, and received the Ho Leung Ho Lee Prize for exceptional Chinese scientist.