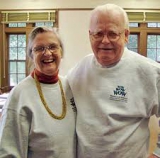 Professor Ostrom received a PhD in political science from UCLA in 1950. He began his academic career at the University of Wyoming in 1945, and came to IU as a professor in 1964. In 1973, he and his wife, Elinor Ostrom, founded the Workshop in Political Theory and Policy Analysis.

He has served as a consultant to the Wyoming Legislative Interim Committee; Tennessee Water Policy Commission; on Natural Resources for the Alaska Constitutional Convention; on the Study of Resource Management and Economic Development for the Territory of Hawaii; and to the National Water Commission, completing a major study of the Southern California water industry in 1971; and served as a member and vice-chairman of the Oregon State Water Resources Board.

He received the Daniel Elazar Distinguished Scholar Award (1991), the Martha Derthick Best Book Award (1999); the Robert O. Anderson Sustainable Arctic Award (2003) from the Institute of the North for his vital role in the drafting of the Natural Resource Article in the Alaskan Constitution; co-recipient with Elinor Ostrom of the Atlas Economic Research Foundation's Lifetime Achievement Award (2003); the John Gaus Distinguished Lecturer Award (2005) from the American Political Science Association; and co-recipient with Elinor Ostrom of The University Medal (2010), Indiana University, Bloomington.

He is author of The Intellectual Crisis in American Public Administration ([1973] 2008), The Political Theory of a Compound Republic ([1971] 2008), The Meaning of Democracy and the Vulnerability of Democracies (1997), Rethinking Institutional Analysis and Development ([1988] 1993, with David Feeny and Hartmut Picht), The Meaning of American Federalism (1991), Local Government in the United States (1988, with Robert Bish and Elinor Ostrom), The Quest to Understand Human Affairs: Natural Resources Policy and Essays on Community and Collective Choice, vol. 1 (2011, edited by Barbara Allen), The Quest to Understand Human Affairs: Essays on Collective, Constitutional, and Epistemic Choice, vol. 2 (2012, edited by Barbara Allen), and coauthor and contributor to numerous other works.