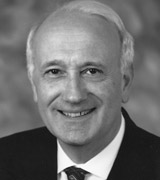 He received two postdoctoral research fellowship grants allowing him to study in the United States at the Albert Einstein College of Medicine, Bronx, N.Y. (1970-1973) and then he was a resident in pathology and neuropathology from 1973-1976. In 1976, he became an Assistant Professor of Pathology at Indiana University School of Medicine. By 1978 he became an Associate Professor and in 1983 full Professor.

Since 1991, he has been the Director of the Indiana Alzheimer Disease Center, one of 29 Alzheimer Disease Centers funded by the NIA. He holds joint appointments in the Departments of Pathology and Laboratory Medicine, Psychiatry, Medical and Molecular Genetics, and Neurology. In 1997, he was appointed to the rank of Distinguished Professor.

Throughout his career he has contributed to the understanding of the causes and mechanisms of neurodegenerative diseases in both humans and animals. In the field of human diseases, his contributions are evident by the fact that he and his collaborators have played an important role in the discovery of novel clinical and pathologic phenotypes, linking each phenotype to its relevant gene and then identifying the specific genetic mutations. Such mutations are in the DNA coding for three of the most significant proteins involved in the neurodegenerative process of presenile and senile dementias, namely APP, PrP and Tau. Recently he has studied forms of presenile dementias associated with mutations in Presenilin 1, Neuroserpin, Ferritin Light Polypeptide genes. In the field of animal diseases, his research contributions have spanned from the study of neurological mutant mice, such as the weaver and pcd, to the transgenic mice carrying mutant genes, APP, Tau and PrP.