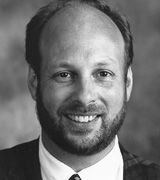 David B. Audretsch is a Distinguished Professor and the Ameritech Chair of Economic Development and Director of the Institute for Development Strategies at Indiana University. He is also the Director of the Max Planck Institute of Economics in Jena, Germany. He also serves as an Honorary Professor at the Friedrich Schiller University of Jena, Research Professor at Durham University, a Scholar-in-Residence at the Ewing Marion Kauffman Foundation, an External Director of Research at the Kiel Institute for the World Economics, and is a Research Fellow of the Centre for Economic Policy Research (London).

Audretsch's research has focused on the links between entrepreneurship, government policy, innovation, economic development and global competitiveness. Professor Audretsch is ranked as the 21st most cited scholar in economics and business, 1996-2006 and has been recognized as being among the 60 most important economists of all time. He has received support for his research from a broad spectrum of foundations and government agencies, including the Ewing Marion Kauffman Foundation, the Advanced Technology Program (ATP) of the National Institute of Standards and Technology (NIST), the National Academy of Science, U.S. Department of Education, and the National Science Foundation. His research has been published in over one hundred scholarly articles in the leading academic journals. His books include Entrepreneurship and Economic Growth, with Oxford University Press in 2006 and The Entrepreneurial Society, also with Oxford University Press in 2007. He is co-founder and co-editor of Small Business Economics: An Entrepreneurship Journal. He was awarded the 2001 International Award for Entrepreneurship and Small Business Research by the Swedish Foundation for Small Business Research. In 2008 he was awarded an Honorary Doctorate Degree by the University of Augsburg.

He has consulted with the World Bank, National Academy of Sciences, U.S. State Department, United States Federal Trade Commission, General Accounting Office and International Trade Commission as well as the United Nations, Commission of the European Union, the European Parliament, the OECD, as well as numerous private corporations, state governments, and a number of European Governments. He is a member of the Advisory Board to a number of international research and policy institutes, including the Zentrum fuer Europaeisch Wirtschaftsforschung (ZEW, Centre for Economic Research), Mannheim, the Deutsches Institut fuer Wirtschaftsforschung (German Institute for Economic Analysis), the Basque Institute for Competitiveness, the Deutsche Telekom Foundation, and the Swedish Foundation for Research on Entrepreneurship and Small Business.