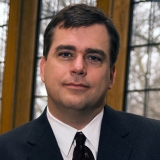 Fred H. Cate is the vice president for research at Indiana University, Distinguished Professor and the C. Ben Dutton Professor of Law, Indiana University Bloomington Maurer School of Law. Cate works at the forefront of privacy and other information law and policy issues. His research has addressed the expansion of copyright laws, especially in the context of digital networks; freedom of expression; the impact of privacy laws and regulations; and the use of information technologies for specialized purposes, such as natural disaster mitigation and organ transplantation.

He frequently advises governments, corporations, and not-for-profit groups on these issues. He testifies regularly before Congress and state legislatures and has held fellowships at the American Enterprise Institute, the Annenberg Washington Program in Communications Policy Studies, the Brookings Institution, and other organizations. He chaired the International Telecommunication Unions High-Level Experts on Electronic Signatures and Certification Authorities, the United Nations Working Group on Emergency Telecommunications, and the American Association of University Professors Subcommittee on Intellectual Property Rights.

He currently serves as senior policy advisor to the Hunton & Williams Center for Information Policy Leadership, consultant to the Department of Defense Technology and Privacy Advisory Committee, and as a member of Microsoft's Trustworthy Computing Academic Advisory Board, the American Historical Association's Task Force on Intellectual Property, and the board of editors of Privacy and Information Law Report.

Cate is the author or editor of more than 100 articles and books, including Privacy in the Information Age and The Internet and the First Amendment, both of which were selected for the Choice Outstanding Academic Books list by the Association of College and Research Libraries, and Privacy in Perspective. He is the co-author of the sixth edition of Mass Media Law.

Cate received the IU Bicentennial Medal in August 2019 in recognition of his distinguished service as vice president for research and member of the president's executive cabinet.