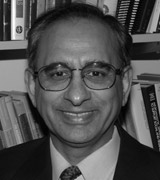 Trivedi has published extensively in professional journals and has also co-authored or edited eight volumes. His past professional honors and awards include the Leverhulme Fellowship at the Indiana Statistical Institute, the World Bank Research Fellowship, the Journal of Econometrics Fellowship, and the Jean Monnet Fellowship at the European University Institute. He served as a Co-Editor of the Royal Economic Society's Econometrics Journal (online) from 2000-2007. Currently he serves on editorial boards of the Journal of Applied Econometrics, and of the Foundations and Trends in Econometrics.

Trivedi's current research interests are concentrated in microeconometrics. He has worked extensively with graduate students and colleagues to develop new models, statistical estimation and inference procedures with reference to econometric models of count data. With Colin Cameron, he co-authored a definitive research monograph, entitled Regression Analysis of Count Data (CUP, 1998), and published as an Econometric Society monograph. He has also co-authored a major graduate text, with Cameron, titled Microeconometrics: Methods and Applications, (CUP, 2005), which is now widely used and cited throughout the world. His current and recent empirical research has been concerned predominantly with modeling the demand for insurance and health care in the U.S.A. His current research projects concern the role of insurance plans on healthcare utilization. These projects have received funding from the Agency for Healthcare Research and Quality and the Robert Wood Johnson Foundation. He was awarded Distinguished Professor in 2009.