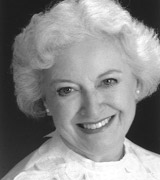 Violette Verdy was the leading ballerina of the 20th century, principal dancer for the New York City Ballet for 20 years, and former artistic director of the Paris Opera Ballet and Boston Ballet. She joined the faculty at Indiana University's Jacobs School of Music to become a Distinguished Professor of Ballet in 2005, and was the inaugural recipient of the Kathy Ziliak Anderson Chair in Ballet in 2010. Verdy has also served as an artistic advisor to the Rock School of Ballet, Philadelphia, and as principal guest teacher to the School of American Ballet, New York City.

As an international ballerina, Verdy performed with major companies in America and Europe, such as the Metropolitan Opera in New York, the Royal Ballet at Covent Garden, the Paris Opera Ballet, and the Stuttgart, Munich, and Hamburg ballets. Verdy premiered the title role in Birgit Culberg's MISS JULIE at American Ballet Theater and, upon joining New York City Ballet, George Balanchine created many roles for her. Throughout her career, Verdy has also taught and choreographed for many companies and schools throughout the world, including The New York City Ballet, The Royal Ballet, The Paris Opera, The Australian Ballet Company, The Royal Danish Ballet, The Ballet of Teatro Alla Scala, The Hamburg Ballet, and The Bolshoi Ballet Company, where she was the first outside female teacher invited since 1917.

Verdy has published children's literature, has appeared on stage, on film, and was featured on British, French, Canadian, and American television. She has been the subject of two biographies: BALLERINA by Victoria Huckenpahler and VIOLETTE VERDY by Dominique Delouche and Florence Poudru; and of several documentaries

Verdy has been the recipient of numerous awards and recognitions. Most notably she was the recipient of two medals from the French Government The Chevalier de l'Ordre des Arts et Lettres in 1971, and Chevalier de l'Ordre National de la Légion d'honneur in 2009, and, on two separate occasions in 1976, was invited to dance at the White House by the President and First Lady, Gerald & Betty Ford. In 1992, Brittany, France, Verdy's hometown, named its new theatre auditorium in her honor. She holds honorary doctorates from Goucher College, Boston Conservatory and Skidmore College, and in 2000, she was the recipient of Chautauqua Institution's Kay Logan's Award for Excellence in Teaching. In 2001, She was awarded the Gala XV Women of Distinction Award from Birmingham-Southern College, and a Lifetime Achievement Award from Ballet Teachers in Higher Education CORPS de Ballet, Inc. In 2003, The School of American Ballet awarded her their Artistic Achievements Award, and in 2007, she received the Ballet2000 Irène Lidova Lifetime Achievement Award in recognition of a great personality that has been a beacon for several generations of artists of the dance. In 2009, the School of American Ballet honored her with the Mae L. Wien Faculty Award for Distinguished Service.