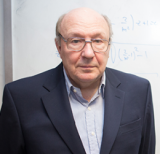 Professor Its received his B.S. (1972), M.S. (1974) and PhD (1977) degrees from Leningrad State University, and his Habilitation (1987) from the Leningrad Branch of the Steklov Mathematical Institute. He joined the faculty at IUPUI in 1993.

Professor Its works at the interface between mathematics and physics and he has been one of the key figures in the theory of integrable systems since the late 1970s. He has made several major contributions in the development of the so-called algebro-geometric and Riemann-Hilbert approaches to the study of evolution equations. His other research interests include spectral theory of differential operators, special functions, orthogonal polynomials and marix models.