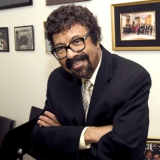 David Nathaniel Baker, Jr. is a native of Indianapolis, Indiana. He currently holds the position of Distinguished Professor of Music and Chairman Emeritus of the Jazz Department at the Indiana University School of Music. Baker has taught and performed throughout the world, including in the USA, Canada, Europe, Scandinavia, New Zealand, and Japan. In addition to leading his own groups he has performed and recorded with numerous jazz artists and was a member of the bands of Stan Kenton, Lionel Hampton, Maynard Ferguson, Quincy Jones, and George Russell. He is also the conductor and musical director of the Smithsonian Jazz Masterworks Orchestra.

Baker received both bachelor's and master's degrees in music education from Indiana University and has studied with a wide range of master teachers, performers and composers including J.J. Johnson, Bobby Brookmeyer, Janos Starker, George Russell, William Russo, and Gunther Schuller. A 1973 Pulitzer Prize nominee, Baker was nominated for a Grammy Award in 1979, and has been honored three times by Down Beat magazine (as a trombonist, for lifetime achievement, and in their Jazz Education Hall of Fame). Among his other awards are the National Association of Jazz Educators Hall of Fame Award, the President's Award for Distinguished Teaching (Indiana University), the Arts Midwest Jazz Masters Award, and the Governor's Arts Award of the State of Indiana.

A dedicated music educator as well as composer and performer, Baker's involvement in music organizations has encompassed membership on the National Council on the Arts; board positions for the American Symphony Orchestra League, Arts Midwest, and the Afro-American Bicentennial Hall of Fame/Museum; and past chairs of the Jazz Advisory Panel to the Kennedy Center and the Jazz/Folk/ Ethnic Panel of the National Endowment for the Arts. He is past vice president of the International Association of Jazz Educators and is currently president of the National Jazz Service Organization and senior consultant for music programs for the Smithsonian Institution. He has more than 65 recordings, 70 books, and 400 articles to his credit.