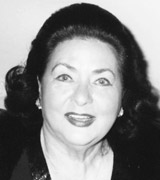 Born in Romania, Virginia Zeani heard her first opera in Bucharest at age nine. It was then that she set her heart on becoming an opera singer. She studied with the famed Russian soprano Lydia Lipkovska and with the legendary tenor Aureliano Pertile before making her debut. Zeani reigned as prima donna assoluta at the Teatro dell'Opera in Rome for 25 years.

From her debut in Bologna, Italy in 1948 until her retirement from the stage in 1982, she sang 69 leading roles. Performing in five languages, she moved with agility among the coloratura, lyric, and dramatic soprano repertoires. She was especially admired for her interpretation of Violetta in La Traviata which she sang more than 600 times.

In her long career Zeani sang with some of the finest colleagues of her time, from tenor Beniamino Gigli to Mario del Monaco, Franco Corelli, Giuseppe di Stefano, Alfred Kraus, Domingo, and Pavarotti. Her extensive recordings of many of the most beloved soprano roles are treasured by collectors everywhere.

In 1980, Zeani and her late husband, the famous basso Nicola Rossi-Lemeni, joined the voice faculty of the Indiana University School of Music. They were immediately sought out by top students from around the world who benefited from their internationally renowned talents as both performers and teachers. He was honored with the rank of Distinguished Professor of Music in 1991 and she was awarded the title of Distinguished Professor of Music in 1994. This was the first occasion in the history of the University for a husband and wife to both receive this prestigious award. Zeani is the recipient of more than 30 awards and orders of merit for her singing, including the coveted Puccini Prize awarded in 1992 and Verdi in 1975.

In 2004, Professor Zeani retired from Indiana University and now lives in West Palm Beach, Florida where she continues to teach students who sing in leading opera houses around the world.