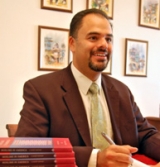 Edward E. Curtis IV is the Millennium Chair of Liberal Arts and professor of religious studies in the School of Liberal Arts at IUPUI. Curtis also serves as adjunct professor of American studies and Africana studies and is the co-founder and co-editor of the Journal of Africana Religion. He joined IUPUI's faculty in 2005. His academic interests include Africana religions, Islamic studies, U.S. history, modern Middle East, and religion and politics. Curtis received his B.A. in Religion from Kenyon College in 1993, his M.A. in History from Washington University in 1997, and his D.Litt. in Philosophy from the University of South Africa in 2000.

Curtis served as a Carnegie Scholar from 2008 to 2009 and a Fulbright fellow in Jordan from 2009 to 2010. He is a recipient of a National Endowment for the Humanities fellowship from 2004 to 2005 and an Andrew Mellon Foundation fellowship from 1993 to 1994. Curtis is the author of several Muslim-American and African-American history books including Muslims in America: A Short History which was named one of the best 100 books of 2009 by Publishers Weekly. His two-volume Encyclopedia of Muslim-American History was also deemed one of the best reference works of 2010 by Library Journal. Curtis has published articles in journals such as the Journal of American History, American Quarterly, the Journal of the American Academy of Religion, and Religion and American Culture as well as interviews and articles to the New York Times, the Wall Street Journal, the Washington Post, National Public Radio, and the Associated Press.