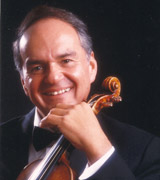 In more than forty years before the public, Jaime Laredo has excelled in the multiple roles of soloist, conductor, recitalist and chamber musician. Since his stunning orchestral debut at the age of eleven with the San Francisco Symphony, he has won the admiration and respect of audiences, critics and fellow musicians with his passionate and polished performances. That debut inspired one critic to write: 'In the 1920's it was Yehudi Menuhin; in the 1930's it was Isaac Stern; and last night it was Jaime Laredo.' His education and development were greatly influenced by private coaching with eminent masters Josef Gingold, Pablo Casals, Ivan Galamian and George Szell. At the age of seventeen, Jaime Laredo won the prestigious Queen Elisabeth of Belgium Competition, launching his rise to international prominence.

For fifteen years, Mr. Laredo was violist of the piano quartet consisting of renowned pianist Emanuel Ax, celebrated violinist Isaac Stern, and distinguished cellist Yo-Yo Ma, his close colleagues and chamber music collaborators. Together, the quartet recorded nearly the entire piano quartet repertoire on the SONY Classical label, including the works of Beethoven, Mozart, Schumann, Fauré, and Brahms, for which they won a Grammy Award.

Mr. Laredo has recorded close to one hundred discs, received the Deutsche Schallplatten Prize, and has been awarded seven Grammy nominations. Mr. Laredo's discs on CBS and RCA have included the complete Bach Sonatas with the late Glenn Gould and a KOCH International Classics album of duos with Ms. Robinson featuring works by Handel, Kodaly, Mozart and Ravel. His releases on the Dorian label include Schubert's complete works for violin and piano with Stephanie Brown, and Virtuoso!, a collection of favorite violin encores with pianist Margo Garrett. Other releases include Mozart's Sinfonia Concertante and Concertone with Cho-Liang Lin for Sony. In May 2000, KOCH released the Kalichstein-Laredo-Robinson Trio's two-CD set of the chamber works of Maurice Ravel, to follow the complete trios and sonatas of Shostakovich. In 2009 the Trio released a 4-disc set of the complete Brahms' Piano Trios. The Kalichstein-Laredo-Robinson Trio has recently released the complete Schubert and Beethoven trios, and Mr. Laredo has also released an album with Sharon Robinson and the Vermont Symphony entitled "Triple Doubles," which includes three double concertos dedicated to the Duo: Daron Hagen's Masquerade, a new, fully-orchestrated version of Richard Danielpour's A Child's Reliquary, (originally written as a piano trio for the Kalichstein-Laredo-Robinson Trio); and David Ludwig's Concerto for Violin, Cello and Orchestra. Both albums were released by BRIDGE in November, 2012.

A recent project titled Two x Four celebrates the relationship between the teacher and the student through music. With his colleague and former student Jennifer Koh, Mr. Laredo and Ms. Koh kicked off the inaugural season in May with the Delaware Symphony performing the Double Concerti for Two Violins by J.S. Bach, Philip Glass, and two newly commissioned concerti by composers Anna Clyne and David Ludwig. The IRIS orchestra, Chicago Symphony, Vermont Symphony, Kimmel Center in Philadelphia, Kennedy Center and the Miller Theater of Columbia University are on the schedule for this season.

Recognized internationally as a sought after violin teacher, Mr. Laredo has fostered the education of violinists that include Leila Josefowitz, Hillary Hahn, Jennifer Koh, Ivan Chan, Soovin Kim, Pamela Frank and Bella Hristova. After 35 years of teaching at the Curtis Institute of Music in Philadelphia, 7 years at Indiana University's Jacob School of Music, Mr. Laredo teaches at the Cleveland Institute of Music, where his wife cellist Sharon Robinson also holds a teaching position. Additionally, Mr. Laredo is the conductor of the New York String Orchestra at Carnegie Hall, which brings young musicians from around the world to the stage every December.

As Artistic Director of New York's renowned Chamber Music at the Y series, Mr. Laredo has created an important forum for chamber music performances which has developed a devoted following. His stewardships of the annual New York String Orchestra Seminar at Carnegie Hall and the International Violin Competition of Indianapolis have become beloved educational pillars of the string community. A principal figure at the Marlboro Music Festival in years past, he has also been involved at Tanglewood, Aspen, Ravinia, Mostly Mozart, and the Hollywood Bowl, as well as festivals in Italy, Spain, Finland, Greece, Israel, Austria, Switzerland and England.

Born in Bolivia, Jaime Laredo, together with wife Sharon Robinson, resides in Vermont and Indiana.