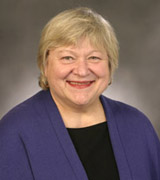 Professor Angela McBride joined the IU faculty in 1978, after earning her PhD in developmental psychology from Purdue University and a master's in psychiatric-mental health nursing from Yale University. She was instrumental in locating Sigma Theta Tau's International Center for Nursing Scholarship on the IUPUI campus during her presidency of that organization (1987-89), and has served as president of the American Academy of Nursing (1993-95). McBride served IU in a number of capacities, including as the Associate Dean for Research, a Distinguished Professor Nursing, and the fourth dean of the Indiana University School of Nursing. Her efforts expanded teaching initiatives, technology, and community nursing at IUPUI. With McBride's help, all 8 campuses of IU School of Nursing became accredited, a PhD program was added, web-based education was developed, and external funding was increased by millions of dollars.

Since 2004, she has been a member of the Clarian Health board, and chairs their Committee on Quality and Patient Safety. In keeping with her strong commitment to leadership development, she also chairs the National Advisory Committee for the Robert Wood Johnson Foundation's Nurse Faculty Scholar Program.

McBride's reputation in women's health dates back to having written the first highly-praised book to look at motherhood in light of the women's movement. "The Growth and Development of Mothers" was recognized as one of the best books of 1973 by both The New York Times and the American Journal of Nursing. From 1997 to 2001, she served on the advisory committee of NIH's Office of Research on Women's Health, in which capacity she helped draft a new research agenda for that area. Currently, she serves on the board of the Society for Research on Women's Health.

McBride has been much honored for her contributions to women's health and nursing. In 1988, University Hospitals of Cleveland presented her with the MacDonald Hospital for Women Award. In 1995, she received the "Outstanding Contribution to Nursing and Health Psychology" Award from the American Psychological Association's Division 38 on Health Psychology; that same year, she was elected to membership in the Institute of Medicine, The National Academies. In 2006, the American Academy of Nursing recognized her as a "Living Legend."

Mcbride and her husband, William, have donated to Indiana University for over three decades. Recipients of their generosity include the Bepko Scholars and Fellows Program, Center on Philanthropy, Chancellor's Circle Fund, and the Schools of Medicine, Liberal Arts, Science, Public and Environmental Affairs, and Nursing. Their commitment to the School of Nursing includes support for the Emily Holmquist Professorship, the School of Nursing Fund, the Sonna Merk Lectureship, diversity enrichment, and the John and Mary Barron Quality of Life Investigator Research Fund, created in honor of Angela's parents. Additionally, as a legacy to Dr. McBride's service, the Angela Barron McBride Professorship in Mental Health Nursing was created in 2003.