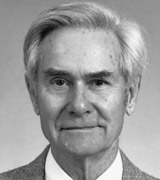 Professor John R. Preer enrolled in the zoology department at Indiana University to study taxonomy with Kinsey, who worked on gall wasps. However, a course given by the dynamic young geneticist Tracy Sonneborn altered his plans, and he began to work in protozoology. His plans were further altered by Pearl Harbor.

After the war, he returned to Bloomington to finish his graduate work, which culminated in the completion of his Ph.D. in 1947. In 1968, Preer returned to IU to take a position in the department of his mentor, Sonneborn. The presence of these two scientists in the same place meant that Indiana was the acknowledged world center for work on the genetics of protozoa.

In 1976, Preer was elected to membership in the National Academy of Sciences and shortly thereafter was made Distinguished Professor of Biology at IU.

As molecular biology revolutionized experimental approaches to understanding control of gene expression, Preer learned new techniques and adapted them to his work. In 1985, he developed a new method of introducing genes into paramecium, a method which promises to accelerate greatly the rate at which molecular questions can be studies in this organism.