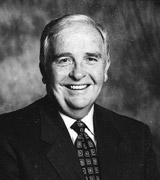 Jack Wentworth received a bachelor's degree in business from IU in 1950 and received his MBA and doctorate in business from IU in 1954 and 1959. He has been a member of the Indiana University faculty since 1959 and served as Dean of the School of Business from March 1984 through June 1993. During his tenure as Dean, the Business School rose in national rankings to second place for its undergraduate program and eighth for its MBA program; private support for the School gained nearly fivefold to more than $3 million; and membership in the School's alumni association nearly doubled. In addition, he guided a revolutionary restructuring of the MBA Program and led the School in internationalizing its curriculum and integrating technology into its programs.

Professor Wentworth has served as national Vice President of the American Marketing Association, Chairman of the Board of Trustees of the Graduate Management Admissions Council, and President of the Association for University Business and Economic Research. One of the early leaders in establishing the Consortium for Graduate Study in Management, an organization to encourage minorities to enter the field of business, he served as its Chairperson for two years. Wentworth was elected to the Board of Governors for Beta Gamma Sigma and served as the national President of that organization. He served as Director of the Tri-County Mental Health Association, Indianapolis, and Chairman of the Selection Committee for the Central Indiana Business Hall of Fame, sponsored by Junior Achievement.

Wentworth served from 1978 to 1985 as Indiana's Faculty Representative to the Big Ten Athletic Conference and the National Collegiate Athletic Association. In 1980-81 he was Chairman of the Big Ten Conference and also served as Chairman of its Management Review and Finance Committee. He was a member of the Select Committee on Athletic Problems and Concerns in Higher Education, an independent commission established by the NCAA in 1982. In addition to his active role in educational and professional organizations, Wentworth has served as a consultant to such companies as General Motors, Hallmark Cards, General Electric, Indiana Automobile Dealers Association, and other firms and organizations. In 1999, he was honored with IU's Distinguished Alumni Service Award.