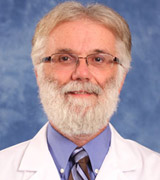 Professor Grignon received a B.Sc. from the University of Western Ontario, London Canada in 1977 and an M.D. from UWO in 1981. He completed residency training in Anatomic Pathology at UWO. He was awarded a McEeachern Fellowship by the Canadian Cancer Society for a 2 year Fellowship in Surgical and Urological Pathology at the M.D. Anderson Cancer Center in Houston, TX. In 1988 he joined the faculty at UWO, becoming Associate professor in 1992. In 1992 he relocated to Wayne State University in Detroit, MI where he became the Director of Surgical Pathology in 1996, Acting Chairman of the Department of Pathology in 1999 and Chairman of the Department in 2000. He also served as Chief of Pathology at Harper University Hospital, Chief of Pathology and the Karmanos Cancer Institute and Specialist-in-Chief for Pathology and Laboratory Medicine at the Detroit Medical Center. In 2007 he joined the Department of Pathology and Laboratory Medicine at Indiana University as the Vice Chair for Clinical Programs.

Professor Grignon is recognized nationally and internationally as an authority in urologic pathology and has lectured and presented short courses at universities and professional societies around the world. His research has focused on the pathology of urologic diseases with a focus on prognostic markers in prostate, bladder and kidney tumors. He has published over 280 peer reviewed scientific articles and is a coauthor on 4 text books including the Armed Forces Institute of pathology 4th Series Fascicle on Tumors of the Kidney, Bladder and Related Urinary Structures and Gleason Grading of Prostate Cancer: A Contemporary Approach. He is a member of multiple professional societies and serves on several editorial boards. He has also been a member of committees of the College of American Pathologists, World Health Organization, Radiation Therapy Oncology Group, and many others.