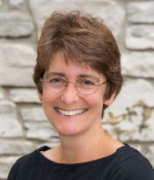 Tatiana Foroud completed her B.S. in Biology and Mathematics at Fairfield University in Connecticut. She received her M.S. in Biomathematics from the University of California, Los Angeles, and her Ph.D. in Population Genetics from the Indiana University School of Medicine. Foroud joined IU in 1994 as instructor of medicine and has served as Director of the Division of Hereditary Genomics, was named P. Michael Conneally Professor in 2005, and Chancellor's Professor in 2008. Foroud currently serves as Chair of the Department of Medical and Molecular Genetics and holds the Joe C. Christian Professorship. Foroud is the PI for 8 National Institutes of Health (NIH) or foundation grants and is co-investigator on an additional 11 NIH or foundation grants; in sum, her work is supported with more than $6M of direct annual support. She has over 450 peer-reviewed publications, is the first or last author for more than 100 of these, and has published 13 book chapters as first or senior author. Her papers have been cited more than 13,500 times (h-index of 65) and she has given over 150 invited lectures around the world.

A "nationally renowned statistical geneticist," "Foroud's participation in a genetic study is a sure indication of the quality of the study." Her work is focused on the identification of genes contributing to common, complex diseases and disorders such as Alzheimer disease, Parkinson disease, intracranial aneurysms, osteoporosis, alcoholism, various psychiatric illnesses, as well as several types of cancer. She is "playing a leading role" in the discovery of the genetic underpinnings of diseases that afflict large patient groups. "There is no doubt she is a major figure in both Alzheimer Disease (AD) and Parkinson Disease (PD) research." She is PI for a Biorepository Grant, the national cell repository for Alzheimer disease; she leads the center from which all US Alzheimer Disease samples are collated and distributed. This responsibility reflects the "respect and trust" of her peers and her "scrupulous fairness." "It is not an exaggeration at all to say that the major part of the genetics of Alzheimer's disease that has been accomplished in the last decade is in no small part to the wonderful leadership shown by Foroud."

Over the span of the last 15 years, her research group has also led efforts to identify genes and variants that contribute to Parkinson disease susceptibility. Key findings include the largest genetic meta-analysis of PD, the first estimate of the frequency of LRRK2 mutations in familial PD, and the first report of whole exome sequencing in familial PD. She is also the leader of the Parkinson's Progression Markers Initiative Biorepository Core and the NCAA-DOD funded Concussion Assessment, Research, and Education Consortium Biorepository. Her recent work on fetal alcohol syndrome has focused on the examination of candidate genes for features of fetal alcohol disorders. A novel approach developed by Foroud, and collaborator Peter Hammond, to identify children with prenatal alcohol exposure is being expanded to develop a facial imaging tool that could be used broadly to screen children potentially exposed to alcohol prenatally. She is a project leader and scientific director for the Collaborative Studies on the Genetics of Alcoholism, a National Institute of Alcohol Abuse and Alcoholism U10 funded study.

In addition to her contributions to statistical genetics, Foroud is "commend[ed] most for her leadership." She is a "central figure" working to develop uniform biospecimen collection protocols and she co-chaired the National Institute on Aging biospecimen best practices committee. A "prominent leader" in her field, she has served as an ad-Hoc NIH grants reviewer on nine study sections (1996-2002) and was a member of 11 special emphasis panels (1998-2002). She has served as a standing member of 18 NIH study sections (2002-2016) and was elected Chair for seven of those study sections. These committees place her in the center of the national dialogue that is defining the future of NIH-funding in genetics for the entire United States.