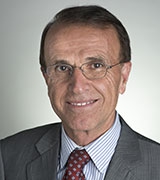 Professor Torabi received a B.S. and M.S.P.H. from the University of Tehran; Ph.D. from Purdue University; and M.P.H. from Indiana University. He is a former founding Dean of the School of Public Health-Bloomington, and served as Chair of the Department of Applied Health Science for eleven years. He is a fellow of six national and international professional health organizations in his field. Mohammad (Mo) has also served as Co-Director of the Institute for Drug Abuse Prevention, Co-Director of the Rural Center for AIDS/STD Prevention, and Director of the Center for Health and Safety Studies.

His research focus has been in the area of measurement and evaluation of school and public health education programs and factors associated with health behavior. His research extends into health promotion and key factors related to individuals' decisions in the prevention of drug abuse, cancer, HIV/AIDS infection. He has extensively published his research in a variety of major journals in the field. He has authored and coauthored several book chapters, book, and monographs. His scholarly work in the area of AIDS/STD prevention led him to an endowed professorship (W. L. Yarber Professor of Health Education, 1998-99). Professor Torabi has served as a research consultant for various state and national organizations, including governmental and non-governmental agencies, and has presented his research in major national and international conferences.

In April 2017, Mo received the Provost Medal for his distinguished academic career and exemplary service to Indiana University as the Founding Dean of School of Public Health-Bloomington.