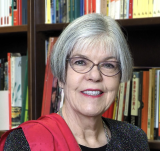 Professor Wokeck attended the universities of Hamburg and Freiburg i. Br., Germany, and passed the state's exam in History and English (Staatsexamen), Hamburg University, 1973). She began studies in the United States in 1973 and earned a Ph.D. in history from Temple University, Philadelphia, in 1982.

She joined the Papers of William Penn, a select letterpress project, in 1983 and was one of the editors of the third and fourth volumes of the five-volume series, The Paper of William Penn. She was the founding editor and director of the Biographical Dictionary of Early Pennsylvania, a project supported by the National Endowment for the Humanities (1986-91), and co-editor and author of the first volume of Lawmaking and Legislators in Pennsylvania. She joined IUPUI as an assistant professor of history in 1991, pursuing research and teaching interests in early American, immigration, and women's history, with adjunct appointments in American Studies, and Women's , Gender, and Sexuality Studies.

In 1999 she published Trade in Strangers: The Beginnings of Mass Migration to North America, a reflection of her interest in the history of the North Atlantic World in the 17th and 18th centuries and, similarly and more recently, Immigrant Entrepreneurship: German-American Business Biographies, vol. 1 (http://www.immigrantentrepreneurship.org/), German Historical Institute, Washington, DC. She was a Fulbright Senior Scholar at the Martin-Luther University Halle-Wittenberg in 1997-98; and is a graduate of the Summer Institute for Women in Higher Education Administration. In 1999, she first joined, then directed the Santayana Edition, a critical edition project supported by the NEH (The Letters of George Santayana, volume 5 in 8 books and Life of Reason, volume 7 in 5 books of The Works of George Santayana) and she also edited the journal of the Association for Documentary Editing (2001-7). She served as associate dean of faculty affairs in the IUPUI School of Liberal Arts (20o6-13) and as director of the Institute for American Thought (2013-17). She was named Chancellor's Professor in 2009. Her commitment to faculty governance concluded with service as president of the IUPUI Faculty Council and co-president of the University Council. Her support of the campus and university is reflected in IUPUI's Spirit of Philanthropy award (2o16) and having joined, together with her late husband P.M.G. Harris, the IU Presidents Circle (2018).