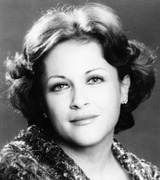 Soprano Costanza Cuccaro won high acclaim for her performances in many of the world's opera houses and concert halls. A native of Ohio and a graduate of the University of Iowa, she was one of the youngest contestants ever to win first place in the Metropolitan Opera National Auditions.

After study in Rome as a Fulbright scholar, Costanza Cuccaro began her international career at the Zürich Opera and later became the leading lyric-coloratura at the Deutsche Oper Berlin. She performed leading soprano roles with The Metropolitan Opera, The Dallas Opera, Teatro Colon, Toronto, Montreal, Deutsche Oper Berlin, Hamburg, Munich, and Vienna State Operas. Her repertoire included Lucia di Lammermoor, Rigoletto, Ariadne auf Naxos, and The Magic Flute. Her Metropolitan Opera debut role was Rosina in The Barber of Seville. She has appeared with the Chicago, Cleveland, Paris, Berlin, Rome, Detroit, Toronto, and Tel Aviv orchestras and has been heralded for her interpretations of the music of J. S. Bach in such cities as Moscow, Prague, Leipzig, Cleveland, Buenos Aires and Rio de Janeiro.

Costanza Cuccaro has presented performances, masterclasses, and workshops at The International Congress of Voice Teachers, The NATS National Conventions, The Voice Foundation, The NATS Mentoring Program, and major apprenticeship programs, festivals, and universities. She has won Distinguished Teaching Awards from Missouri University and Indiana University.

Costanza Cuccaro was performance indications editor for two volumes of Vincenzo Righini's music, published by Southern Music. She was named Chancellor's Professor in Music in 2003.