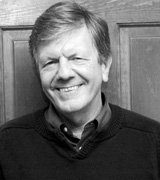 Alex Dzierba completed his undergraduate studies in his home town of Buffalo, NY at Canisius College in 1964. He received his Ph. D. in experimental elementary particle physics from the University of Notre Dame in 1969. After a four-year stint as a Research Fellow and later Senior Research Fellow at the California Institute of Technology in Pasadena, CA he joined the physics faculty at Indiana University in 1973. He was promoted to full professor in 1979 and Chancellor's Professor in May 2005. In May 2006, he became Chancellor's Professor Emeritus and started an appointment at Jefferson Lab (Newport News, VA) as Distinguished Visiting Fellow.

Dzierba served as a Program Officer for Elementary Particle Physics at the National Science Foundation during the 1982 - 1983 academic year and was Scientific Associate at the European Organization for Nuclear Research (CERN) in Geneva, Switzerland during the 1985 - 1986 academic year.

Dzierba has served as scientific leader for a number of international collaborations of physicists at the Fermi National Accelerator Lab (Batavia, IL), Brookhaven National Lab (Upton, LI NY) and Jefferson Lab (Newport News, VA). He was elected to the Users Executive Committee at Fermilab in 1982 to 1984 and was chair of the Users Executive Committee at Brookhaven Lab from 1991 to 1993. He currently leads a collaboration of nearly 100 physicists at 25 institutions in six countries to build a major new detector facility at Jefferson Lab to look for a new type of matter called exotic mesons. He also serves as Trustee-at-Large for the Southeastern Universities Research Association (SURA), the managing body for Jefferson Lab.

Dzierba is co-author of more than 100 articles in refereed journals and co-authored the cover story for the September, 2000 issue of American Scientist (recently re-printed with an update in 2005 in the Polish journal Postepy Fiziki). That was the basis for his 2004 Distinguished Faculty Research Lecture - - Exotic Particles and the Confinement of Quarks. The title of that lecture inspired Professor Don Freund of the School of Music to compose a musical piece for a wind ensemble, with the same title, that premiered at the Musical Arts Center on February 15, 2005.

He was elected to the Honors College faculty in 2000. In 1994, Dzierba developed the honors freshman introductory physics course which he taught for eight of the years during the period from 1994 to 2004. He won teaching excellence awards in the physics department from 1995 through 1999 and in 2000 won the IU Trustee's Teaching award. Undergraduates working in his research group have included several Wells and STARS scholars and many of these students are now doing, or have recently completed, graduate work at Berkeley, Caltech, Cambridge, Chicago, Cornell and M.I.T. Alex serves on the board of examiners for the GRE physics exam. He was elected Fellow of the American Physical Society in 1992.

Alex is the proud father of three sons (Alex Jr, Robert and Christopher and a daughter Carolyn). Christopher is a student at Harmony School and Alex's three older children did their undergrad work at Indiana University. Alex and his wife Linda and their son Christopher live in Greene County where they enjoy their horses and working outdoors. Alex and Linda also are avid scuba divers and underwater photographers.