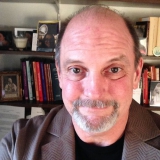 Dr. Stapleton earned a B.S. from Eastern Michigan University in 1981 (English and History) and a Ph.D. from the University of Michigan in 1987 (English Renaissance Literature). After three years of postdoctoral work in Ann Arbor, he became Professor of English at Stephen F. Austin State University, in Nacogdoches, Texas, a position he held for fourteen years. He earned a Mellon grant to pursue research at the Harry Ransom Humanities Research Center in Austin, Texas, in 1995. He was awarded the Chapman Professorship at IPFW in April, 2004.

Dr. Stapleton specializes in English literature of the early modern period (1500-1700), with emphasis on lyric poetry, drama, and imitation theory, especially the methods that writers of the period use to incorporate their readings of classical literature into the creative process. He has published many articles and reviews about authors such as Ovid, Horace, Seneca, Milton, Shakespeare, Spenser, and Marvell. His books include Harmful Eloquence: Ovid's "Amores" from Antiquity to Shakespeare (1996); Thomas Heywood's "Art of Love": The First Complete English Translation of Ovid's "Ars Amatoria" (2000); Fated Sky: The Femina Furens in Shakespeare (2000); Admired and Understood: The Poetry of Aphra Behn (2004).