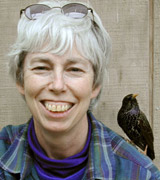 Meredith West grew up in New England graduating from Tufts University with majors in psychology and Russian. She moved to Cornell University for graduate school, receiving a PhD in experimental and comparative psychology. She then served on the faculty of the University of North Carolina at Chapel Hill. In 1990, she joined the psychology and biology faculties at IU, along with her husband and collaborator, Dr. Andrew King. She has served on many NSF and NIH panels and is on the editorial board of several journals. She served as executive editor of the journal Animal Behaviour and helped found the central office for the Animal Behavior Society here in Bloomington. She also served as president of Animal Behavior Society. She also spent five years as editor of the Journal of Comparative Psychology. Her research interests are in social and vocal learning in birds and babies, with a special focus on how social companions facilitate advances in vocal production, function, and use. Her research with Dr. King has been supported by NSF for thirty years.