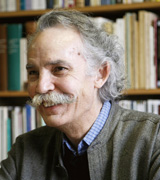 Henry Glassie received his Ph.D. in folklore from the University of Pennsylvania. After teaching in IU's renowned Folklore Institute, he returned to Penn to be chair of its Department of Folklore and Folklife. In 1988, he came home to IU as College Professor of Folklore. He serves, too, as Co-Director of Turkish Studies, has adjunct appointments in Central Eurasian Studies, Near Eastern Languages and Cultures, and American Studies, and is a member of the Advisory Council of India Studies. His early research on the American cultural landscape resulted in two major books on vernacular architecture, both often reprinted.

With a Guggenheim fellowship, he went to Ireland and has written four books on Irish culture; one of them, Passing the Time in Ballymenone, won the Chicago Folklore Prize, and the Haney Prize in the Social Sciences. The research he began in 1982 on the living arts of modern Turkey has yielded a major exhibition, which appeared in the IU Art Museum, and a book published by the IU Press. Like two of his earlier works, Turkish Traditional Art Today, was named among the notable books of the year by the New York Times, and for it he was honored with the Award for Superior Service by the Turkish Ministry of Culture and the Award for Outstanding Achievement in the Arts by the Assembly of Turkish American Associations. In 1998, he received the state Certificate of Honour from the Ministry of Cultural Affairs of Bangladesh for his book Art and Life in Bangladesh. His latest book, Vernacular Architecture, won the Cummings Award for the best book on North American architecture in 2001.

He has recently completed a fifth book on Ireland, published by the IU Press in 2006, and he is currently at work on a book on Japanese figurative ceramics. Glassie has lectured widely in Europe and Asia as well as North America. He has been president of the Vernacular Architecture Forum and the American Folklore Society, and he is a Folklore Fellow of the Finnish Academy. He has received a Teaching Excellence Award from Indiana University.