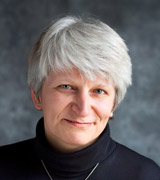 Aina Puce was born in Melbourne, Australia. She received a Bachelor of Applied Science (Biophysics) and a Master of Applied Science (Physics) from Swinburne Institute of Technology in Melbourne Australia in 1981 and 1985, respectively, and a Ph.D. (Medicine) from the University of Melbourne, Australia in 1990. Professor Puce joined IU in Fall 2008, becoming the Eleanor Cox Riggs Professor and also the Director of the Imaging Research Facility.

Professor Puce is an expert in the field of social cognitive neuroscience. She has helped to delineate the neural basis of face perception in the human brain, as studied with invasive electrophysiological recordings and functional magnetic resonance imaging (fMRI). These studies were performed at a time when fMRI was still in its very early stages, and she has continued to help develop this methodology. Professor Puce's studies today examine the neural basis of social action interpretation. To achieve this end multiple methods of study are used, including fMRI, non-invasive electrophysiology and transcranial magnetic stimulation.

Professor Puce has Chaired to Cognition and Perception Study Section for the National Institutes of Health (NIH), and has been an external advisory committee member for a large NIH funded multi-center trial for studying chronic kidney disease in children, and a NIH funded center of biomedical research excellence. Professor Puce has served on the editorial boards of the journals Psychophysiology and Neuroimage. She has served on the Governing Council of the Organization for Human Brain Mapping.