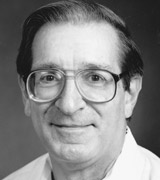 Peters received a Ph.D. from Harvard University in 1962 and began his academic career at IU the same year. He was named the Herman T. Briscoe Professor in 1975.