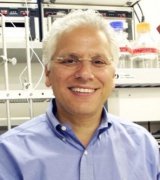 Richard DiMarchi is an expert in peptide chemistry, biochemistry and pharmacology, whose career spans academia, biotechnology and the pharmaceutical industry. His current research focuses on developing macromolecules with enhanced therapeutic properties through biochemical and chemical optimization. He serves as the Linda and Jack Gill Chair in Biomolecular Sciences and previously held the Standiford H. Cox Professor of Chemistry in the IU Bloomington College of Arts and Sciences' Department of Chemistry, where he has also served as department chair.

A highly respected international authority in the discovery, development and manufacture of new drugs, DiMarchi joined IU in 2003 after 22 years as a senior research scientist at Eli Lilly and Co. He discovered Humalog at Lilly Research Laboratories and contributed to the development of a number of peptide and protein-based medicines, including Forteo, rGlucagon and Humulin, which annually sell in excess of $5 billion.

He is the holder of more than 100 patents; co-author of more than 150 scientific papers; co-founder of the IU-initiated Marcadia Biotech, purchased by Roche in 2010, and Calibrium LLC, purchased by Novo-Nordisk in 2015; and co-founder of the biotechnology companies Ambrx, Assembly and MB-2. Merck, Roche and Novo-Nordisk are also independently advancing novel drug candidates inspired by discoveries of the DiMarchi laboratory at IU.

In addition, DiMarchi has been chair of the Peptide Therapeutics Foundation since 2008 and served as a member of the board of directors for the Biotechnology Industry Organization from 2001 to 2003. He has served as scientific advisor to Ferring Pharmaceuticals, Merck, Roche and three venture funds: 5AM Ventures, Thomas McNerney Ventures and Twilight Venture Partners. He is also a member of the external advisory committee for the Industry Collaboration Portal at the IU School of Medicine.

The holder of numerous awards, DiMarchi is the recipient of the 2005 American Association of Pharmaceutical Scientists Career Research Achievement Award in Biotechnology; 2006 American Chemical Society's Barnes Award for Leadership in Chemical Research Management and Esselen Award for Chemistry in the Service of Public Interest; 2007 Carothers Award for Excellence in Polymer Sciences; 2009 Watanabe Award for Life Sciences Research; 2011 Merrifield Award for Career Contributions in Peptide Sciences; 2012 Phillip E. Nelson Innovation Award; and 2014 Erwin Schr'dinger-Preis. He is also a 2014 inductee to the National Inventors Hall of Fame and a 2015 inductee to the National Academy of Inventors, and he will receive the 2016 American Chemical Society Alfred Burger Award in Medicinal Chemistry.