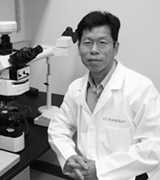 The main focus in Dr. Xie's laboratory is to investigate signal transduction of the hedgehog pathway and its role in the development of cancers. The hedgehog signaling is a master regulator for cell differentiation, tissue polarity and cell proliferation. In the last few years, Dr. Xie and his colleagues have discovered two members of this pathway, patched and smoothened, being responsible for the development of basal cell carcinomas (BCCs) and medulloblastomas. Medulloblastomas, a primitive neuroectodermal tumor of cerebellum, account for 20% incidence of pediatric brain tumors, progress rapidly into malignant tumors. Recent data indicate that hedgehog signaling is activated in about 30% extracutaneous tumors, including gastrointestinal, prostate and breast cancers. They are taking three approaches to understand the mechanism by which activation of the hedgehog pathway contributes to cancers. First, the activating form of smoothened is used as a "biological probe" for the identification, isolation and functional dissection of molecular components that collaborate to regulate the signaling pathway. Second, they are studying the interaction of this pathway with other signaling pathways in human cancers. Third, mouse models are being used to understand activation of the hedgehog pathway in vivo. Ultimately, they hope to find ways to inhibit this pathway with small molecules in relevant human cancers.

Dr. Xie is currently associate editor for the International Journal of Cancer Research and associate editor of the Asian Journal of Cell Biology, and a member of the American Association for Cancer Research, American Society of Cell Biology, American Society of Biochemistry and Molecular Biology, and American Gastroenterology Association. He received the Overseas-Scholar Award in 2003-2005 by The National Science Foundation of the People's Republic of China.