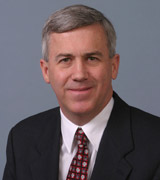 After completing undergraduate studies at Calvin College, Frederick J. Rescorla attended medical school at the University of Wisconsin graduating in 1981. He entered surgical residency at the Indiana University School of Medicine completing general surgery in 1986 and pediatric surgery in 1988. Dr. Rescorla joined the faculty in the Section of Pediatric Surgery at Indiana University School of Medicine developing an active clinical practice focused on minimally invasive surgery and oncologic surgery. He was promoted to Associate Professor in 1993 and Professor in 2000. He is certified by the American Board of Surgery in General Surgery, pediatric surgery and surgical critical care.

He is active in teaching and has been recognized by the medical students as an outstanding professor on many occasions and has also received the Trustees Teaching Award. He has served as an active member of the faculty instructing residents in general surgery and post-graduate residents in pediatric surgery. He is active in service to the University and has served on the medical school admission committee since 1989.