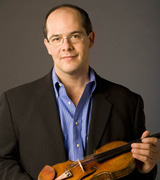 Raised in Alexandria, VA, violinist Alexander Kerr balances an orchestral career with solo and chamber engagements throughout Europe, North America, and the Far East. In 1996, at the age of 26, he was appointed concertmaster of the Royal Concertgebouw Orchestra, where he served before coming to IU. He has also served as concertmaster of the Aspen Music Festival Orchestra and Chamber Symphony, the Cincinnati Symphony Orchestra, and the Charleston Symphony Orchestra.

Kerr has numerous CD releases to his credit, including the Dvorak Piano Quintet with Sara Chang and renowned Norwegian classical pianist Leif Ove Andsnes; music by Dutch composer Julius Röntgen; and Shostakovich's Romance on a series of discs including "Violin Adagios" and "Evening Adagios."

He also has contributed to a live DVD and CD recording of Strauss' Ein Heldenleben with the Royal Concertgebouw Orchestra and Maestro Mariss Jansons.

A member of the faculties of the Amsterdam Conservatory and the Aspen Music Festival and School in Colorado, Kerr regularly presents master classes at several of the nation's leading music schools and conservatories