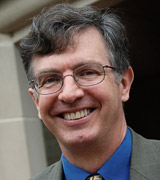 Professor Stake is the President of SEAL, the Society for Evolutionary Analysis in Law ( http://sealsite.org), and a co-founder of the Midwest Law and Economics Association (MLEA). Professor Stake's interdisciplinary research focuses primarily on property law and family law, but has been extended to topics ranging from the First Amendment and divorce law to law school grading and rankings. One recent article applies evolutionary analysis in search of the roots of property law, arguing that some rules of property reflect basic human instincts. It was published in the Philosophical Transactions of the Royal Society, the oldest continuously publishing scientific journal in the world.

Professor Stake teaches Property, Wills and Trusts, and Land-Use Controls. His engaging and popular style has led to visiting appointments at Illinois, Colorado, Georgetown, and Paris II (Pantheon-Assas). Here at Indiana, he has received is the Leon Wallace Teaching Award and the Trustees Teaching Award.

Professor Stake received a B.A. in Math and Psychology in 1975 from the University of Illinois, and a J.D. in 1981 from Georgetown University Law Center, where he served on the Georgetown Law Journal. After clerking for the Honorable Oscar H. Davis, from 1981 to 1982 on the U.S. Court of Claims (now the Federal Circuit), he was an Associate at Covington & Burling in Washington, D.C., from 1982-85.