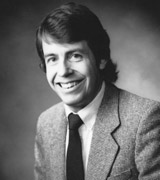 Professor McKivigan received a B.A. degree from Indiana University of Pennsylvania (1971) and his M.A. (1973) and Ph.D. (1977) from the Ohio State University. He was an editor of the Frederick Douglass Papers and adjunct member of the History and Afro-American and African Studies department at Yale University from 1979 to 1989. In the latter year, McKivigan joined the History department at West Virginia University, where he taught until coming to IUPUI in August 1998.

McKivigan is an expert in the historical study of the American antislavery movement. In 1984, he published The War Against Proslavery Religion which analyzed the abolitionists' campaign to enlist the Northern churches in the antislavery movement. In 1996, he published an annotated edition of James Redpath's The Roving Editor; or, Talks with the Slaves in the Southern States (1859). He recently co-edited two collections of original scholarly essays on the antebellum slavery controversy, Religion and the Antebellum Debate over Slavery (1998) and Antislavery Violence (forthcoming 1999). In addition, he has published more than thirty scholarly articles on various aspects on abolitionist activities.

Since 1994, McKivigan has been the director of the Frederick Douglass Papers, a documentary editing project supported by the National Endowment for the Humanities and the National Historical Publications and Records Commission, which has relocated on the Indianapolis campus. The next volume of that project's work, a new edition of The Narrative of the Life of Frederick Douglass, will be published in 1999 by Yale University Press.