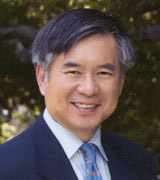 Professor Chen received a M.D. degree from the National Taiwan University. He joined IU in 2007 to serve as professor of medicine, Director of the Krannert Institute of Cardiology and Chief of Division of Cardiology, Department of Medicine at IU School of Medicine.

Professor Chen is interested in the field of heart rhythm management and research. He has developed and helped develop the Upper Limit of Vulnerability Hypothesis of Cardiac Defibrillation. He also discovered the arrhythmogenic potential of the ligament of Marshall, and helped establish the importance of ligament of Marshall ablation in the treatment of atrial fibrillation. His laboratory also demonstrated the importance of nerve sprouting and neural remodeling in cardiac arrhythmogenesis. His other research interests include high density mapping of cardiac fibrillation using computerized mapping and optical imaging techniques.

Professor Chen received his postgraduate training at University of Texas Southwestern Medical School and Duke University Medical Center. He served on the faculty of the University of California, San Diego and Los Angeles, and was a staff cardiologist and the Pauline and Harold Price Chair in Cardiac Electrophysiology Research at Cedars-Sinai Medical Center, Los Angeles before he joined IU in 2007.