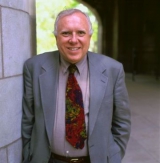 Professor Dunn specializes in logic and the foundations of mathematics; philosophy of language, philosophy of mind, formal and foundational aspects of computer science. Besides holding the Ewing professorship in philosophy, he is also Dean Emeritus of the School of Informatics, Professor of Computer Science and a core faculty member in the Cognitive Science Program. He retired from academics in 2007.

Professor Dunn was a Woodrow Wilson Fellow in 1963-64 and a Andrew Mellon Fellow in 1964-65, followed by the Woodrow Wilson Dissertation Fellow in 1965-66. He was on a Research Fulbright to the Australian National University Institute for Advanced Studies, 1975, Senior Visitor, Oxford Mathematical Institute, 1978, and Distinguished Visitor, University of Melbourne, 1983. Dunn was selected a fellow of the American Council of Learned Societies in 1984. He was selected to Who's Who in America in 1985.