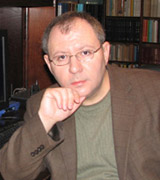 Born in Ankara, Turkey in 1964 to a middle-class Muslim family, he was educated in public schools from the elementary to the college level. After completing his B.A. from the Department of Turkology at Ankara University in 1988, he was awarded a governmental scholarship to study abroad. He came to the United States in 1988, where he received his M.A. in Turkic Studies from Indiana University, Bloomington in 1990, and his Ph.D. in 1993. In the Fall of 1993, he was appointed as Assistant Professor of Near Eastern Languages and Civilization at the University of Washington in Seattle. In 1997, he returned to his alma mater, Indiana University to become the holder of the Ottoman and Modern Turkish Studies Endowed Chair. Throughout his academic career, he has been teaching a wide variety of undergraduate and graduate courses, from "Islamic Civilization" to "Islamist Jihad"; from "Medieval Ottoman Manuscripts" to "Contemporary Turkish Media." Among his books are Nedim and the Poetics of the Ottoman Court: Medieval Inheritance and the Need for Change (1994); An Anthology of Turkish Literature (1996); and Ahmedi's History of the Kings of the Ottoman Lineage and Their Holy Raids against the Infidels (2004).