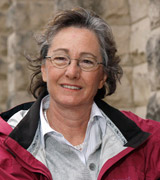 Lisa M. Pratt is an expert on the biogeochemical cycle of sulfur with particular emphasis on sulfur-based ecosystems in the deep subsurface of Earth. Her collaborative research with Tullis Onstott (Princeton University) on a single-species microbial ecosystem using radiolysis of water as a source of energy appeared in Science Magazine and was highlighted worldwide by television, radio, and newspaper interviews. She has collected groundwater samples from gold mines at depths up to 4 kilometers below the surface in the Witwatersrand basin in South Africa. Her recent research on microbes in sub-permafrost brines from Canada and Greenland is aimed at understanding microbial adaptations to cold environments on Earth and preparing to search for life on Mars.

Professor Pratt received a B.A. (Botany) in 1972 from the University of North Carolina at Chapel Hill, a M.S. (Botany) in 1974 from the University of Illinois at Champaign-Urbana, and a M.S. (Geology) in 1978 again at Chapel Hill. She received a Ph.D. (Geology) in 1982 from Princeton University and went on to be a National Research Council Postdoctoral Fellow with the U.S. Geological Survey. In 1987, she was the first woman to join the Department of Geological Sciences at Indiana University. She received the 2003 Distinguished Faculty Award from the College of Arts and Sciences Alumni Association. She was Director of a NASA Astrobiology Institute Team that studied biosustaining energy and nutrient cycles in the deep subsurface of Earth and Mars. She serves on the NASA Planetary Science Subcommittee (2008-2010) and is Co-Chair of a NASA Science Analysis Group to develop mission concepts for a 2018 Mars rover. Pratt's interest in the ethics of searching for life beyond Earth is the topic of her lectures as a Visiting Scholar for Phi Beta Kappa in 2009-2010.