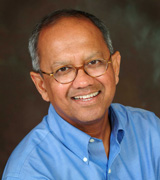 Sumit Ganguly is a Professor of Political Science, holds the Rabindranath Tagore Chair in Indian Cultures and Civilizations. Professor Ganguly is also a Senior Fellow at the Foreign Policy Research Institute, a member of the Council on Foreign Relations, and a Fellow of the American Academy of Arts and Sciences (elected 2017). He has been named a Distinguished Alumnus of Berea College, received the Medal of the Italian Chamber of Deputies (2006), and the Pravasi Bharatiya Samman Award from the President of India (2009). In fall 2017, he was a Visiting Professor at the Strategic Studies Institute of the US Army War College. He was also an Alexander von Humboldt Fellow at the University of Heidelberg for the 2018-2019 academic year.

A specialist on the contemporary politics of South Asia, Professor Ganguly's research spans security, ethnic conflict, democratization, foreign policy, and international politics of that region. He is the author, co-author, editor, or co-editor of 20 books on the region. His most recent books include the Oxford Short Introduction to Indian Foreign Policy (Oxford University Press, 2015), Deadly Impasse: Indo-Pakistani Relations at the Dawn of a New Century (Cambridge University Press, 2016), and, with William R. Thompson, Ascending India and Its State Capacity (Yale University Press, 2017). His research has been funded by the U.S. State Department, the Sloane Foundation, the Carnegie Corporation of New York, the W. Alton Jones Foundation, the U.S. Army War College, and the American Institute for Indian Studies.

Professor Ganguly is the founding editor of the new journal Indian Politics and Policy (Policy Studies Organization, first issue launch in spring 2018) and was the founding editor of the now-established journals The India Review and Asian Security. He is an Associate Editor of Security Studies and serves on the editorial boards of Asian Security, Current History, the Journal of Democracy, Foreign Policy Analysis, The India Review, The Nonproliferation Review, Pacific Affairs, and International Security.

Ganguly received the IU Bicentennial Medal in September 2020 in recognition of his distinguished contributions to Indiana University.