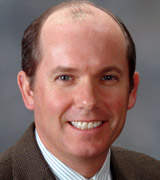 Dr. Jeffrey Dean is Professor of Pediatric Dentistry and Orthodontics at the Indiana University School of Dentistry and Riley Hospital for Children in Indianapolis. He received his bachelor's degree in biochemistry from Purdue University (1979) and his master's and doctoral degrees in dentistry, as well as his specialty certificates in pediatric dentistry (1985) and orthodontics (1996) from Indiana University. Jeff is board certified by both the American Board of Pediatric Dentistry and the American Board of Orthodontics. He served as the Pediatric Dentistry Advanced Specialty Education Program Director from 1998 to 2005 and was Chair of the Department of Oral Facial Development from 2002 until 2007. He now serves as the Indiana University School of Dentistry Executive Associate Dean and the Associate Dean for Academic Affairs, and continues to teach in the Pediatric Dentistry Department and the Orthodontic Department. He is a Past President of both the American Board of Pediatric Dentistry and the College of Diplomates of the ABPD. Jeff has also had the pleasure of serving with Drs. Ralph McDonald and David Avery as coauthor and coeditor of a comprehensive textbook of pediatric dentistry titled, Dentistry for the Child and Adolescent. The text is popular throughout the world, has been published in six languages and is currently in its 9th edition. In addition to his full-time academic work, he maintains an extramural pediatric dentistry and orthodontic private practice. Jeff is married to Barbara, and has three children, two "children-in-laws" and 3 grandchildren.