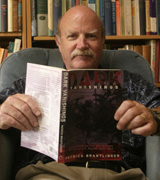 From 1990 to 1994, he served as Chair of the English Department. He was a co-founder and is an adjunct faculty member of the Cultural Studies Graduate Program. He has also served as President of the Midwest Victorian Studies Association; as an elected member of the Modern Language Association Victorian Committee; as an NEH Evaluator for the Actor's Theater of Louisville; and on the editorial boards of several journals besides VS. And he has received Woodrow Wilson, Guggenheim, and NEH fellowships.

Primarily a cultural historian, Professor Brantlinger has written seven books, including The Spirit of Reform: British Literature and Politics, 1830-1900 (1977); Bread and Circuses: Theories of Mass Culture as Social Decay (1983); Rule of Darkness: British Literature and Imperialism, 1830-1914 (1988); Crusoe's Footprints: Cultural Studies in Britain and America (1990); Fictions of State: Culture and Credit in Britain, 1694-1994 (1996); The Reading Lesson: The Threat of Mass Literacy in Nineteenth-Century British Fiction (1998); and Who Killed Shakespeare? What's Happened to English since the Radical Sixties (2001). He is also the editor of several volumes, including the forthcoming, co-edited Blackwell Companion to the Victorian Novel.

Besides the Rudy Professorship, Professor Brantlinger was named Distinguished Faculty Member for 2001 by the Alumni Association of the College of Arts and Sciences.