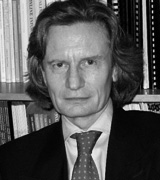 Professor Cronin's research interests include scholarly communication, scientometrics and collaboration in science. He has published extensively on these and related subjects; his books include The Citation Process (1984), The Scholar's Courtesy (1995) and The Hand of Science (2005). He has been Editor of the Annual Review of Information Science and Technology since 2001. Professor Cronin has extensive international experience, and has worked as a consultant for many organizations, including the World Bank, European Commission, U.S. Department of Justice, NATO and UNESCO.

Professor Cronin is an elected Fellow of the Institute of Information Scientists, Institute of Management, Royal Society of Arts, and Library Association. He was awarded the degree Doctor of Letters honoris causa in 1997 by Queen Margaret University College, Edinburgh. In 2006, he received the Award of Merit from the American Society for Information Science and Technology, the Society's highest honor.