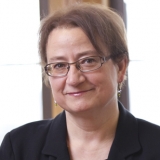 Lauren K. Robel is the executive vice president and provost of Indiana University Bloomington, and Val Nolan Professor of Law in the Maurer School of Law, IUB. Robel received her B.A. (1978) from Auburn University and her J.D. from Indiana University in 1983. She wrote for the Indiana Law Journal, and after graduation served a a law clerk for the Hon. Jesse Eschbach, U.S. Court of Appeals for the Seventh Circuit, 1983-85. She was elected a member of Order of the Coif, and served as the president of the Association of American Law Schools from 2011-2012. Robel has published numerous articles in leading law journals and spoken frequently on topics concerning the federal courts, civil rights, civil procedure, federal jurisdiction, and the federal courts clinic.

Robel joined the Maurer School faculty in 1985, was named associate dean in 1991, and dean in 2011 before being named provost of the university in 2012. Because of her many contributions while serving on faculty at the Maurer School, she was awarded the Law School's Gavel Award, the Wallace Teaching Award, and received the Indiana Bar Foundation's Pro Bono Publico Award. Robel is a member of the executive committee of the Association of American Law Schools and the Rules Committee of the U.S. District Court for the Seventh Circuit.

Robel received the IU Bicentennial Medal in August 2019 in recognition of her distinguished service as executive vice president and provost, IUB and member of the president's executive cabinet.