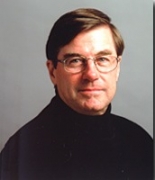 D. Craig Brater is a pharmacological researcher, professor of pharmacology, and former dean of the IU School of Medicine and IU vice president for university clinical affairs. Brater earned a B.A. in chemistry and M.D. from Duke University, and completed his residency in internal medicine at the University of California San Francisco.

While at UCSF, Brater completed a research fellowship in clinical pharmacology and remained on faculty before leaving for the University of Texas Southwestern Medical School, where he spent nine years on the faculty. Brater joined the IU faculty in 1986 as a professor of medicine and director of the Section of Clinical Pharmacology. While at IU Brater's research focused on renal pharmacology in general, with an emphasis on the mechanisms of diuretic response and the effects of non-steroidal anti-inflammatory drugs on renal function.

In 1991 he was appointed chairman of the Department of Medicine, and in 2000, he was selected as the ninth dean of the IU School of Medicine. Brater was the Walter J. Daly Professor and in 2006 became IU vice president for life sciences, which was renamed IU vice president for university clinical affairs in 2010. Brater retired from IU in October 2013 with the titles of vice president emeritus of university clinical affairs and dean and Walter J. Daly Professor Emeritus, Indiana University, School of Medicine.

Brater's passion for the IU School of Medicine was evident in many of the initiatives he helped spearhead, but none more important than the partnership with Moi University School of Medicine in Eldoret, Kenya, one of the most successful responses to the crises of global health and poverty. Brater has been recognized for his many accomplishments having received an honorary doctorate from the Purdue University College of Pharmacy, a Research Career Development Award from the NIH, and the Rawl-Palmer Progress Award in Medicine from the American Society for Clinical Pharmacology and Therapeutics. He has or is currently serving on the boards of the United States Pharmacopeia, BioCrossroads, the Fairbanks Institute, and the Regenstrief Institute, and was a member of the Ethics Committee of the U.S. Olympic Committee.