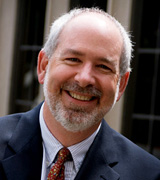 John S. Applegate is the executive vice president for university academic affairs, and the Walter W. Foskett Professor of Law in the IU Bloomington Maurer School of Law. Applegate received his J.D., magna cum laude, from Harvard Law School and his B.A. from Haverford College. Before he joined the Indiana faculty in 1998, he was the James B. Helmer, Jr., professor of law at the University of Cincinnati College of Law. He is a nationally recognized environmental law scholar, recognized for his work in environmental risk assessment and policy analysis. He has written many articles on the regulation of toxic substances and public participation in enviromental decisions.

From 1993 to 1998, Applegate chaired the Fernald Citizens Advisory Board, a site-specific advisory board established by the U.S. Department of Energy to advise it on the environmental clean-up of the former nuclear weapons facility at Fernald, Ohio. Its recommendations have become the blueprint for the Fernald clean-up. He is a former member of the Department of Energy's national Environmental Management Advisory Board, and has served as vice chair of the board of directors of the Hamilton County (Ohio) Environmental Priorities Project. He served on the Committee on Long-Term Institutional Management of DOE Legacy Waste Sites: Phase 2 of the National Research Council (National Academy of Sciences).

Before entering teaching in 1987, Applegate practiced law with the Washington, D.C., law firm of Covington & Burling, and he clerked for Hon. Edward S. Smith of the U.S. Court of Appeals for the Federal Circuit. He is an elected member of the American Law Institute and a National Associate of the National Academy of Sciences.

Applegate received the IU Bicentennial Medal in August 2019 in recognition of his distinguished service as executive vice president for university academic affairs and member of the president's executive cabinet.