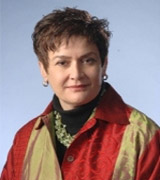 Mary Guerriero Austrom received a B.A. and B.Ed. from Brock University, St. Catharines, Ontario Canada in 1980 and 1981 respectively. She then received her M.A. and Ph.D. from York University, in Toronto in 1983 and 1989 (social psychology). She joined IU in 1990 and became the Wesley P. Martin Professor in 2006. Dr. Guerriero Austrom is a Professor of Clinical Psychology in Clinical Psychiatry in the Department of Psychiatry, Indiana University School of Medicine and the Director of the Education Core at the Indiana Alzheimer's Disease Center.

Dr. Guerriero Austrom is an expert in the field of aging and Alzheimer disease. Her clinical and research interests include developing non-pharmacological interventions for patients and families; providing care for AD patients in the home and in institutional settings. As a result, she also develops and delivers staff and management development workshops on providing care to AD patients for long term care facilities.

Dr. Guerriero Austrom has been awarded the Glenn W. Irwin Jr., M.D., Experience Excellence Recognition Award in 2003 and was selected to the Faculty Colloquium on Excellence in Teaching in 2004. In 2005, she was made a Colonel of the Commonwealth of Kentucky by the State of Kentucky for Excellence in Education. She is currently serving on the Board of Directors of the National Alzheimer's Association. She is also actively involved with other organizations locally and nationally devoted to issues affecting the elderly, such as the Gerontological Society of America and the International Psychogeriatric Association. She regularly speaks to groups nationally and internationally about her work.