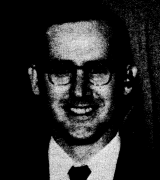 Chester Davis was a bold genius; an authority on the principles and practical aspects of chemical intermediates and dyestuffs. His successful discoveries in the production of universally useful carbonless recording paper has been of substantial practical and financial value. After graduating with a bachelor's in chemistry from IU, Davis began graduate study, and then, industrial employment before setting out on his own in inventing.

Allowed to pursue his independent research in IU's chemistry department, laboratory, and library, Davis worked industriously, thoughtfully, and single mindedly, ultimately negotiating fifteen U.S. and four foreign patents. After the patent rights were assigned for production, major litigation developed, and his courageous, resourceful, and persistent efforts finally led to full acknowledgement of his unassailable rights as the independent patentee.

Believing that successful men and women have a personal and professional responsibility to help others move ahead in their chosen fields, Davis dedicated a handsome portion of his income to the educational institutions for which he felt a special sense of gratitude. Indiana University was the principal beneficiary of his largess, and three prestigious research and scholarship funds speak to his philosophy.