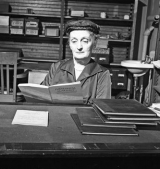 Born in 1886 in Bloomington, Grace Philputt was raised in Indianapolis. She returned to Bloomington to attend IU, where she earned her Bachelors degree in 1908. She then pursued studies at the Sorbonne in Paris, as well as in Grenoble and Tours, and returned to Bloomington to complete her Masters degree in 1914. After a few years teaching French at her high school alma mater, she returned to IU as instructor of French in 1917, moving up the ranks to Assistant, Associate, and in 1952, Full Professor.

While at IU, Professor Philputt met Professor Bert E. Young, also a French scholar and head of the Department of Romance Languages, and then the Department of French and Italian when it was formed in 1934. The two married in 1923 and travelled often together in Europe. In 1936, Grace and Bert Young received permission from the Comédie Française in Paris to analyze and compile the writings of Charles Varlet de la Grange, a prized set of manuscripts in the field of theatrical history. La Grange was an actor in Molière's theater troupe who also served as secretary and recorder of the group. He took a leadership role in the company after Molière's death in 1673, and he then became the first orator of the Comédie Française after it was formed in 1680. The Youngs were still working on this project in summer 1939, when they decided due to political events to return to the United States prematurely, leaving their work behind. They did not get back the manuscripts and their work in progress until after the war, and their edition of the Registre de la Grange, 1659-1685 was published in 1947.

In Bloomington, the Youngs lived just a few houses west of campus on Kirkwood Avenue and walked to class together every day. She learned during her studies in France that ladies must wear hats, so Mrs. Young always wore a hat while teaching. Grace carried on teaching until her retirement in 1956.
"I'll miss the students very much," she told an IDS reporter that summer.

"It is safe to say that Mrs. Young taught French to more students than any other person in the history of Indiana University," wrote her colleagues Alice Nelson and Samuel Will after Grace's death in 1970. "As a human being she was unsurpassed in her sincerity, her warmth, her integrity, and her devotion to Indiana University."