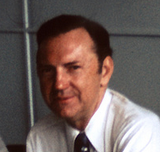 Howard R. Hawkins was a pioneer in the international satellite communications industry. He spent six decades working in the field, including over 30 years with RCA Corporation, where he was the executive vice president and director. During his time at RCA, he was responsible for the establishment of its satellite communications network, which was the first launched in the private sector, and the opening of satellite communication with China. From 1980-2000, he acted as Chairman and Chief Executive Officer of American TransCom, a communications and business ventures consulting firm in Greenwich, CT. Hawkins also served as Trustee of twelve Merrill Lynch mutual investment companies and Chairman of Continental Steel Corporation from 1982 to 1985.

Hawkins attended Indiana University and graduated with B.S. in business administration in 1938, and earned his J.D. in 1941. In World War II, he served as a FBI agent and led an operation of a counter-espionage radio station that communicated with German intelligence from 1943 to 1945. This covert mission was dramatized in the 1945 film, "The House on 92nd Street". Hawkins was awarded a Distinguished Alumni Service Award from Indiana University in 1969 and inducted into the Kelley School of Business Academy of Alumni Fellows in 1976 and the Indiana University Academy of Law Alumni Fellows in 1994.