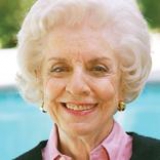 Madelyn Pugh Davis, BA'42, forged a career as one of television's top comedy writers at a time when women in the business were a rarity. She is best known as the co-creator and co-writer of the "I Love Lucy" show with writing partner Bob Carroll. The show staring Lucille Ball was nominated four times for Emmy Awards, winning twice, and remains a timeless classic.

Davis and Carroll worked together for more than 50 years and received a Laurel Award for TV Writing Achievement from the Writers Guild of America. Davis, also a recipient of IU's Distinguished Alumni Service Award, died in April 2011.