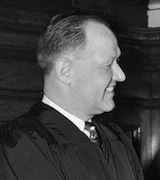 Paul G. Jasper began practicing law in the early 1930s with the firm Peters Leas and Murphy, Fort Wayne. After serving in the Army during World War II, he returned to his Fort Wayne law practice. He was Allen County Democratic party chairman from 1947 to 1948.

In 1948, he was elected to the Indiana Supreme Court at age 40, becoming the youngest justice to sit on the court since 1899. The court's 80th jurist, he wrote 78 majority opinions during his tenure on the bench. During this time, Mr. Jasper also was called upon by President Harry Truman to serve on the President's Emergency Board to hear railroad disputes involving the Boston and Albany Railroad, the Texas and Pacific Railroad and New York Central Railroad.

After four years on the bench, Mr. Jasper resigned to accept a position as general counsel and vice president for Public Service Company of Indiana. After stepping down from the Supreme Court, Mr. Jasper also remained active in bench and bar activities, serving as a special judge, a disciplinary hearing officer for the Indiana Supreme Court and chairman of the Supreme Court committee studying the Indiana judiciary. For more than 16 years, he was a member of the Indiana State Police Board.

A 1932 graduate of Indiana University, Mr. Jasper had been captain of both the basketball and football teams. He was a member of the I-Men's Club, Woodburn Guild, Delta Chi fraternity and Varsity Club. A life member and past president of the IU Alumni Association, he was a recipient of the Distinguished Alumni Service Award and the Zora G. Clevenger Award. For several years, Mr. Jasper served as a class agent and a judge for the moot court program of Indiana University School of Law. He was inducted into the Academy of Law Alumni Fellows at the IU School of Law. Mr. Jasper was named a Sagamore of the Wabash by every Indiana governor since 1948.

Involved in numerous philanthropic and civic activities, he had been active in the Allen County March of Dimes, National Foundation for Infantile paralysis, Fort Wayne Elks and Kiwanis clubs, Indiana State Chamber of Commerce, Columbia Club, Highland Golf and Country Club and Meridian Hills Country Club. He was a 33rd-degree Mason.