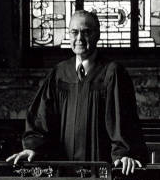 William Elwood Steckler was the youngest Federal Judge in the nation, when he was appointed to the bench of the U.S. District Court of the Southern District of Indiana at the age of 36. The decision was made due to the quality of his private practice and public performance in state positions; over the years, the merit of his judgements and conduct, leadership in encouraging educational programs for judges, and initiatives for court administration and reform proved what a good decision it had been.

Pre-trial conferences, written instructions to juries, checklists of procedures, and an internship program are just a few examples of his important innovations. William was a skillful judicial administrator, and earned widespread, profound respect for the character traits that marked the discharge of his duties; impeccable integrity and fairness, meticulous attention to detail, compassion and courtesy, patience and understanding.